We tested 10 air purifiers to find the quietest, most energy efficient model, and we compared their Clean Air Delivery Rates with industry standards. Although the Coway AP-1512HH doesn’t have the best filter performance, we found it to be the best air purifier for most people. It has a balanced set of features, including timer and auto modes that clean your home’s air only when necessary. It’s portable and one of the lightest units we tested, weighing around 15 pounds. Lastly, it is one of the most energy efficient air purifiers out there. 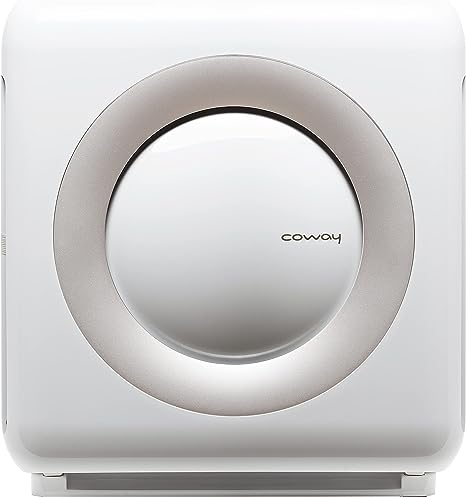 The Coway AP-1512HH is an excellent purifier for bedrooms and kitchens, since it can clean air in rooms up to 360 square feet. Although this is bigger than most master bedrooms, it’s not as effective in large spaces such as family rooms.
Its Clean Air Delivery Rate (CADR) scores are below average compared to the other purifiers we tested, meaning it removes indoor pollutants less effectively than models like the Whirlpool Whispure and Honeywell HPA300, though it’s still capable of cleaning indoor air. The Coway’s four-stage filtration process includes a washable pre-filter for large particles as well as a carbon filter for odors, though we found it might not remove strong odors quickly. The third stage is a HEPA filter that captures the smallest particles such as cigarette smoke and pollen. The final stage is an optional ionizer, though we don’t recommend using this feature since it can produce trace amounts of ozone, a harmful gas. Although the Coway doesn’t have a sleep or quiet mode, its auto mode senses the air quality in the room and fine-tunes the settings. You can also set a timer to run for one, four or eight hours. At its highest setting, the Coway only produces 58 dB of sound, so you can run it while you’re home without too much noise. This machine weighs 15 pounds and is the second-lightest air purifier we tested. This air purifier is Energy Star certified and rated to use up to 79 watts, making it one of the most energy-efficient models we reviewed. The company’s three-year warranty is shorter than that of the best air cleaners but average among air purifiers. 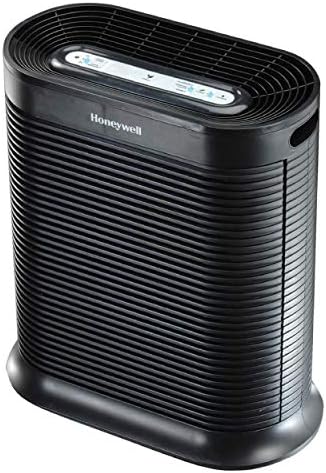 Unlike most large air purifiers, the Honeywell HPA300 is quiet and has a low-profile design. However, it’s missing many of the features you find on other models.
Overall, the HPA300 is more effective at removing indoor pollutants than our top pick from Coway, which is evident in its high CADR scores, particularly the one for dust. The Honeywell HPA300 has a simple, effective design and is more affordable than the Coway, though not by much. Although we tested cheaper air purifiers, their cleaning effectiveness and CADR scores were too low to be considered a better value than this Honeywell unit. This air purifier has a dust CADR of 320, which is one of the best scores of the models we tested – only the Whirlpool Whispure has a higher score. It also removes smoke particles better than most air purifiers, with a CADR of 300. Its pollen CADR score is average for the air cleaners we tested. This unit is effective in rooms up to 465 square feet, making it the second most powerful air cleaner we tested. In addition, it can make five air changes an hour, the most in our review, by circulating a room’s air once every 12 minutes. The Honeywell HPA300 performs well, but it keeps costs down by not having convenience features such as an auto mode that adjusts settings based on a room’s air quality, a shut-off timer or remote control. These are nice to have but aren’t necessary, and the HPA300 does well enough without them. However, it has an excellent five-year warranty, which the longest available among air purifiers. 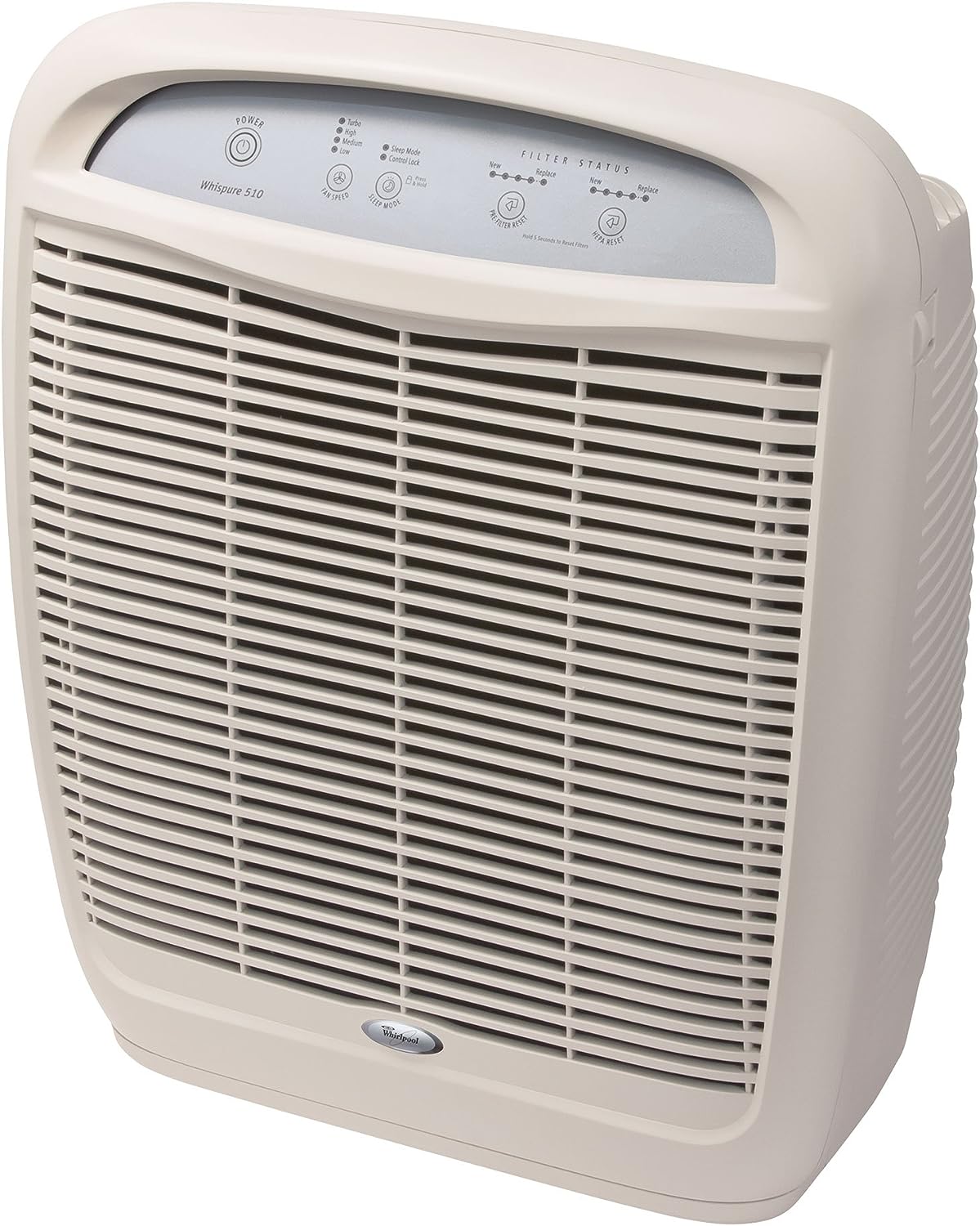 The Whirlpool Whispure AP51030K is quite capable of cleaning large rooms of up to 490 square feet. This makes it the most powerful air purifier we tested, though it’s useful in large and small rooms alike.
Its Clean Air Delivery Rate (CADR) scores are the highest of all the purifiers we reviewed, which means it has the most effective filtering system for removing smoke, dust, and pollen from indoor air. The Whispure’s HEPA filters meet rigorous requirements to catch the smallest airborne particles. However, it only has two cleaning stages, so you might need to replace or clean the filters more often. This is the quietest air purifier we tested – it only produces 55 dB of noise on its highest setting, which is quite low. In addition, it has a sleep mode, which saves energy and makes it even quieter at night. However, the Whirlpool Whispure doesn’t automatically adjust settings based on the air quality in your room like the Coway AP-1512HH. This is also the heaviest air purifier we tested, weighing nearly 20 pounds, which makes it less portable than the Coway. 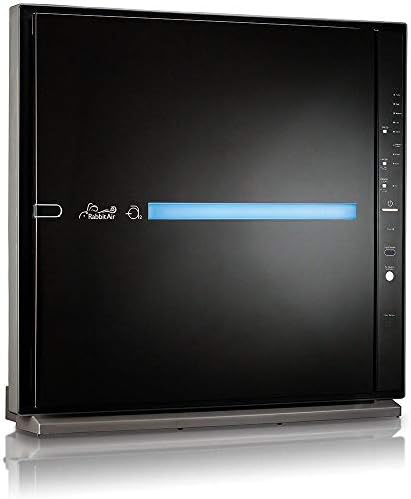 The Rabbit Air MinusA2 is the most efficient air purifier we looked at, it only uses are 62 watts while running. It also has a unique aesthetic that makes it more attractive than the competition.
The low energy consumption of the MinusA2 means it won’t affect your electricity bill too much. However, this unit’s mobile app controls make it an expensive product at nearly $600. There are six cleaning stages that clean air in rooms up to 300 square feet, which is lower than average, but sufficient for most rooms in a home. The filters aren’t as effective as with more affordable units, which is disappointing. A built-in air quality sensor means this unit works automatically and informs you when the filters need to be replaced. You can mount this air purifier on the wall, which is unique among the products we reviewed. Furthermore, Rabbit Air lets you choose from a variety of artwork for the front panel, effectively turning the unit into a decoration that doesn’t detract from your home’s décor. 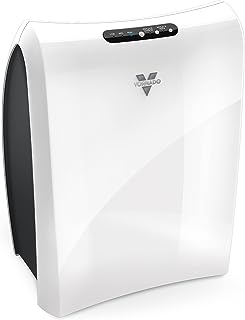 The Kenmore 83396 doesn’t have the same filtering performance as larger air purifiers, but it’s an excellent and affordable option for smaller rooms up to 318 square feet.
It has lower CADR scores and a lower number of air changes per hour than most air purifiers we reviewed, though you can offset these deficiencies by using the unit in smaller rooms. This air purifier only weighs 17 pounds, making it one of the lightest units we reviewed. This means you can move it between rooms without much trouble. Although it’s not particularly efficient compared to the competition, this unit does have an Energy Star certification, which makes it better than many cheaper units on the market. There are only basic timer settings, which means you don’t get sleep or automatic modes, but this simplicity helps make the unit easier to use. The one-year warranty is disappointing compared to the five-year warranties we found on most of the units we reviewed.

Since our last update, the following product is now available to purchase: The Dyson Pure Cool TP04. This model is similar to the Dyson Cool tower fan, but with added HEPA and activated carbon air filters. (Released in March 2018 for $549.99)

As we prepared for this review, we contacted the American Lung Association, the California Air Resources Board and the Association of Home Appliance Manufacturers (AHAM). We spoke with experts and read research from each of these organizations to get a good picture of whether air cleaners are useful and for advice on choosing the best one.

We also asked who benefits from cleaner indoor air. For example, we spoke with Janice Nolen, assistant vice president of national policy for the American Lung Association. She said “people with asthma or allergies, especially children and teenagers, and older adults or people with cardiovascular problems.”

However, Nolen also told ShopSavvy that “removing the source of the pollution problem or adding ventilation [is] far more effective than plugging in a device.” After taking steps to remove pollution sources and ensure good ventilation, Nolen suggests using an air purifier as a supplement to filter out airborne particles that can intensify asthma, allergy symptoms and cardiovascular conditions.

We tested 10 air purifier models from the following brands: Coway, Electrolux, Heaven Fresh, Honeywell, Idylis, Kenmore, RabbitAir, Vornado, Whirlpool and Winix. Because we don’t have a reliable way to test air purification, we used the CADR scores provided by AHAM to judge effectiveness. Instead, our in-house testing focused on noise levels and energy use.

To test the home air purifiers’ noise levels, we ran each machine at both its lowest and highest settings and measured how loud it was using a sound meter. Our tests revealed noise levels on low settings averaged around 30 dB, about the volume of a whisper. When we tested the highest settings, we found an average around 60 dB or greater, about as loud as a conversation.

Noise levels matter most when you plan to use an air cleaner in your bedroom since loud machines can interfere with sleep patterns. However, if you use it in the kitchen during the day, noise levels aren’t as much of an issue.

Our second test tracked how much energy an air cleaner uses on its maximum settings and what sort of effect that might have on your energy bill. We found these machines are inexpensive to use daily, as the least efficient purifier only costs around $60 a year to run, or $5 a month.

How Much do Air Purifiers Cost?

Air purifiers for small rooms and personal use cost between $30 and $200. Larger air purifiers, like the ones in our comparison, cost between $200 and $300, though some premium models cost as much as $600. Additionally, you can expect to pay between $15 and $100 for replacement filters every few months with larger filters demanding a higher premium.

What Else to Look for in an Air Purifier?

Although CADR scores mostly measure purifier effectiveness, they can also tell you what room size a machine can handle. AHAM takes the smoke CADR score and multiples it by 1.55 to get an air purifier’s suggested room size.For best results, an air purifier should cover a larger room than the one you use it in. Using an air purifier in a room larger than it can handle often makes it less effective or useless.

This is how much air the purifier can clean in an hour, and it shows the machine’s airflow. The more times air passes through a machine’s filters, the more likely they are to catch previously missed dust or pollen. To illustrate this, if you use a purifier rated for 500 square feet in a room that’s 250 square feet, you essentially make two air changes every hour.

The most important filter in an air purifier is the HEPA filter, which removes 99.97 percent of 0.3-micrometer particles and must meet rigorous regulations and industry standards. Each air cleaner we tested uses HEPA filters. To prevent larger particles from reaching and blocking the HEPA filter, many air purifiers also use carbon pre-filters and other secondary filters that are easier to maintain.

Ionizers charge particles as they move through the machine so they attach more easily to a filter or any other surface, thus removing themselves from the air. Ionizers are fairly common in air purifiers but controversial, as they produce trace amounts of ozone.

“Ozone is an outdoor air pollutant,” Nolen told ShopSavvy, “and it’s a very dangerous pollutant that causes asthma attacks and has been linked now to cardiovascular disease and certainly causes premature death.”

Due to the risks associated with ozone, the American Lung Association does not recommend using ionizers in your home. We suggest choosing an air cleaner without an ionizer or with one that you can turn off. We did not include it in our scoring.