We researched and evaluated the 20 best car alarms ranging between $20 and $500. We looked at car alarms with remote starters, alarms with GPS trackers, alarms that can monitor your car’s performance and alarms that can disable your vehicle, as well as alarms designed specifically for motorcycles. After 60 hours of research, the Viper 5706V emerged as our pick for the best car alarm overall because of its impressive feature set and uses beyond a simple theft deterrent. 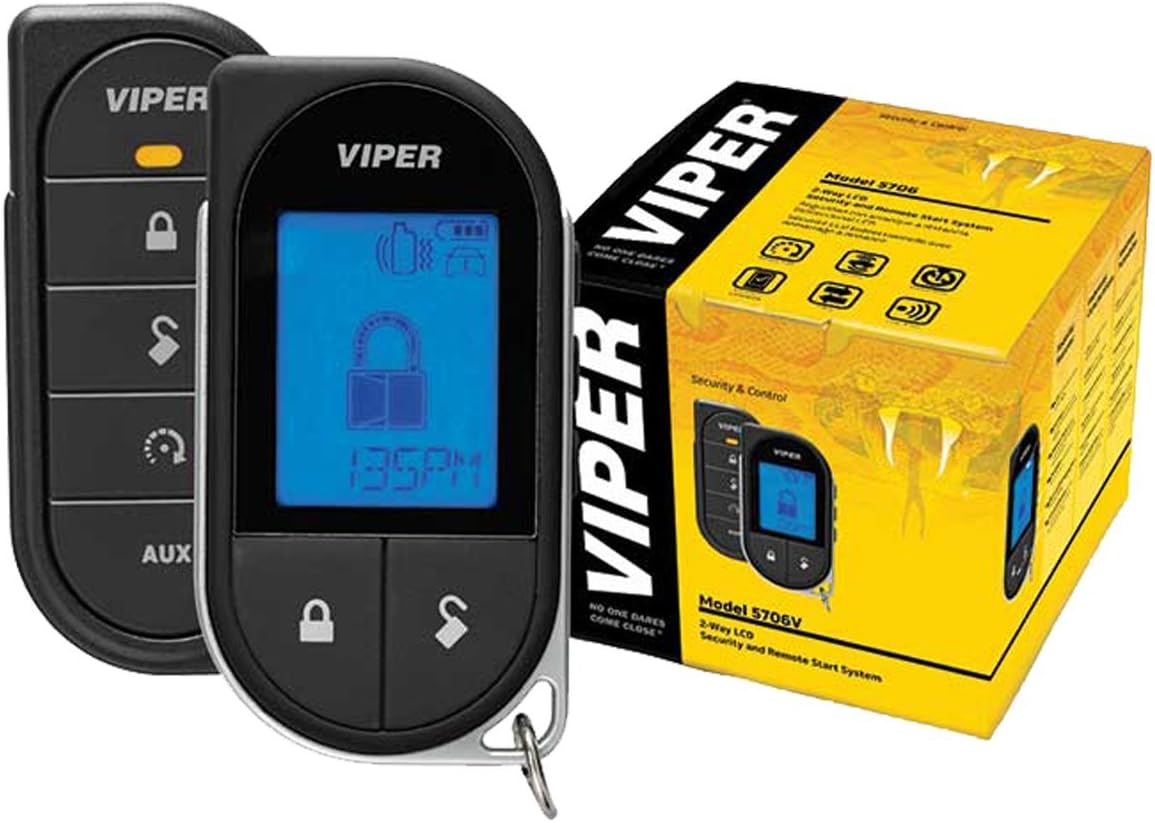 The Viper 5706V is our pick for the best car alarm overall because of its comprehensive theft-deterrent and convenience features. It’s almost identical to the Python 5706P, which we reviewed, but it costs much less and includes smartphone integration.
Both include long-range remotes and remote starting features with similar LCD displays. For peace of mind, cost and convenience, the Viper 5706V is the better option. The standout feature of the Viper 5706V is its remote starter. In fact, you can arguably call it a remote starter that features an alarm system, rather than the other way around. A remote starter is an appealing convenience, especially in areas with extreme temperatures because you can start your car and let the AC or heater bring the interior to your preferred temperature before you get inside. Another standout feature is the Responder LC3 remote. With an LCD display and sensors for the windows, engine, doors and shocks, it can tell you if the alert is for an open door or a smashed window when you’re a mile away from your car. The downside to having so many sensors, however, is that it results in more false alerts. Of course, if you’re truly concerned about the safety of your car, you likely don’t mind a car alarm that is overprotective. One of the reasons the Viper 5706V is one of the best car alarms is it’s compatible with Viper SmartStart products. SmartStart is a module that plugs into your car’s electrical system and allows you to integrate the alarm with an app on your smartphone. This can add GPS tracking, as well as maintenance tracking. Our pick for the best value car alarm is the Avital 3100LX. While it may lack high-end features, like a remote starter and smartphone integration, it does come with a warn-away feature, a six-stage alarm, a fault-proof starter interrupt and a keyless entry. In other words, it’s a very effective theft deterrent, and it costs less than $30.
The Avital 3100LX’s best security feature is its fault-proof starter interrupt system. This makes it impossible for would-be thieves to hotwire your car. In other words, if they want to take off with your ride, they need your keys or a tow truck. Another great feature at this price is the Zone-2 impact sensor, which can distinguish between minor bumps and significant movement to your car. So, when a squirrel runs across your car, the alarm only chirps a warning at it, but if a thief opens the door or breaks a window, a 120 dB alarm goes off. The remote has a range of 1,500 feet, which is excellent. However, it’s only one-way, so the alarm doesn’t alert you through the remote. You’ll only know that the alarm has gone off if you hear it. While the Avital 3100LX security system lacks convenience features like a remote starter and smartphone integration, it does come with keyless entry and trunk release. These features are pretty ubiquitous in contemporary vehicles, but it’s an excellent way to add modern convenience to an older vehicle. 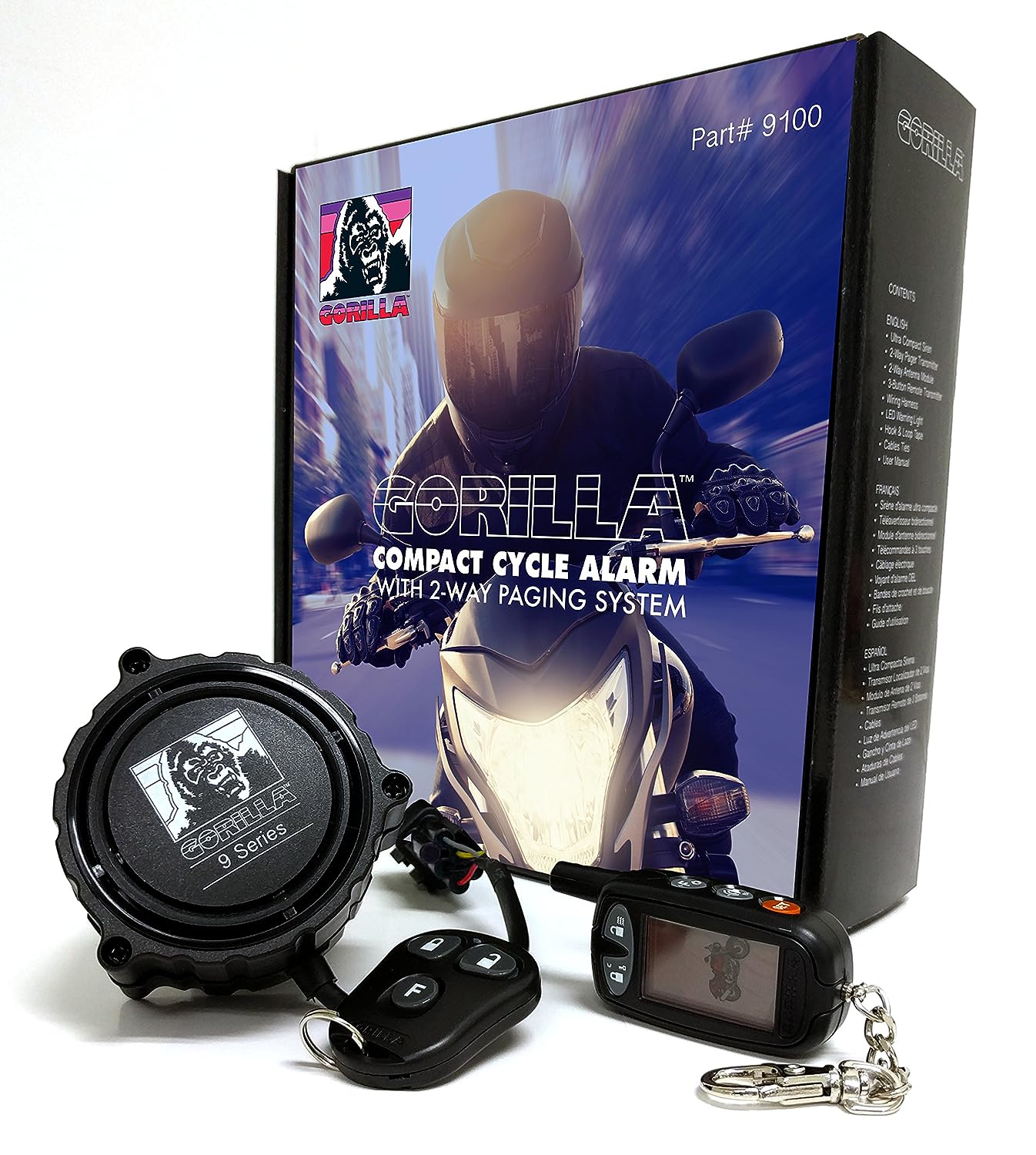 Bikers have intensely devout relationships with their motorcycles, so it makes sense to protect your ride with an alarm. This is why the Gorilla 9100 is our pick for the best motorcycle alarm. It competes with some of the best car alarms on the market with its 120 dB siren and multiple sensors.
The standout feature of the Gorilla 9100 is its warning light, which illuminates the vehicle in bright LED lights when someone gets too close. While this is an excellent theft deterrent because it draws attention to the thief, it’s also a great deterrent to curious passersby. If you don’t want strangers sitting on or even getting close to your motorcycle, this excellent feature warns them to stay away. For sensors, the Gorilla 9100 has a two-stage shock sensor similar to those used in car alarms. It provides a warning chirp for minor bumps and releases a blaring 120 dB siren for more significant ones. It also features a tilt sensor and an electrical current sensor. These protect against towing and hotwiring. The 9100 features a two-way remote, which is rare for a motorcycle alarm. This means the remote alerts you when the alarm goes off. The remote has a half-mile range, which is likely beyond the audible range of the siren. In addition, the remote features an LCD screen that tells you what kind of alarm has been triggered.

We has reviewed the best car alarms since 2010. Each year, we spend between 60 and 120 hours researching, evaluating and reviewing the best theft-deterrent products on the market. This year, I started with over 20 car alarms, eventually narrowing the list to the 10 best car alarms and motorcycle alarms.

Car alarms can range between $20 and $500. Of course, the more you pay, the more features you get, like a remote starter or smartphone integration. However, many users don’t want these convenience features, so we evaluated our picks by considering how various car alarms fulfilled specific niches within the market. We based our picks on the following criteria:

Is it possible for a little-known brand to be better than the most popular brand? Sure. But consumer trends are a great indicator of a product’s reliability, value and overall success at delivering on its purpose. If a product has a good reputation and sells a lot more than its competitors, there’s usually a good reason. This criterion also allowed us to balance the cost with consumer responses to gauge overall value – is the product worth the price, or will another one achieve the same results for cheaper?

While we didn’t base our evaluations solely on popularity and affordability, they played an important part in separating the best from the merely good.

We read hundreds of user reviews for each product we considered. We wanted to hear what people loved and hated about each one. By doing this, we spotted trends in the reviews – if a car alarm is too sensitive or has an exceptionally annoying siren, these complaints show up in many of the reviews.

We looked for features that set each product apart from other similar devices. Most car alarms are simple and do little more than create a lot of noise when activated, so it can be difficult to delineate between the best brands and the worst ones. Additional sensors, remote starters, smartphone integrations, two-way remotes – these are all features we looked for to separate the best from the simply average.

Finally, we compared the most important specifications listed by the manufacturer. These include the range of the remote, the number of alerts you can receive and the types of sensors used to detect vibrations.

What Else to Consider When Buying a Car Alarm System

Car security systems might come with installation instructions, but that doesn’t mean you should attempt to install them yourself. These systems, especially those with a remote start feature or keyless entry, integrate with your car’s electrical system, among other things. So, unless you’re extremely confident in your technical aptitude to figure out your car’s electrical wiring, it’s best to have a professional install the alarm for you.

Most car alarm systems are purchased directly from a dealer, and they typically include the cost of installation. However, if you purchase a car alarm online, you should look for an MECP-certified dealer to install the system. MECP stands for Mobile Electronics Certified Professionals. This certification is proof that dealer can handle the complicated aspects of your car’s electrical system.

Baddies don’t indiscriminately pick cars to steal or break into. They choose cars because the vehicles are easy targets with as little risk as possible. So, don’t be an easy target.

Don’t make it easy on the baddie by leaving your doors unlocked, windows open, car running or a second set of keys under the visor. Evaluate your parking habits and eliminate ones that make it easy for a thief to target your vehicle. Also, don’t leave valuables in your car, and certainly don’t leave them in plain sight. If you leave a laptop on your passenger seat, you’re practically baiting a thief into breaking into your car.

Car thieves don’t want to draw attention, for obvious reasons. If possible, always park in areas that have bright lights and high foot traffic. If there are a lot of potential eyes near the car, the thief will likely move on to an easier target.

Make sure your car alarm advertises itself through a small flashing light, a window decal or both. If the baddie sees your car has an alarm, they’ll know it’s not an easy target and move on.

Sometimes thieves don’t aim to steal your car – they could be after what’s under the hood. If you own a car with valuable aftermarket parts on the engine, you can install hood locks. These devices require you to unlock the hood manually, which means someone can’t simply break into your car, pop the hood and steal your nitrous injection kit.

You can’t drive a car for long without a steering wheel. If you’re exceptionally paranoid about someone stealing your car, you can install a quick-release steering wheel, which allows you to remove the steering wheel when you leave the car. Of course, this doesn’t come without its faults. Nobody likes to go grocery shopping while lugging around a steering wheel.

Kill switches are like RFID immobilizers in that they are designed to make it difficult for a baddie to hotwire a car. Kill switch engage systems are connected to your car’s electrical system and require you to enter a combination or flip switches in hidden locations before you can start the engine. A baddie could possibly figure it out, but it would take far more time than is worth the risk. The downside is installations can be very complicated and costly. These are generally used in collector vehicles.

Cars are often stolen and stripped of their parts, which are sold separately for a greater profit. If you etch your vehicle’s unique VIN number on your windows and other valuable parts, it makes them a lot more trackable. This means it’s also a deterrent for would-be thieves because they don’t want to steal a car that’s difficult to make a profit on.

Not only does a dash cam provide invaluable evidence if you’re ever in an accident, but some cams have security features to protect your property when you’re not driving around. With motion detectors and GPS, some dash cams are great additions to a car security system.