We spent over 120 hours researching and evaluating car subwoofers. After all of this, our pick for the overall best car subwoofer is the Pioneer Champion because it had the best audio quality, the lowest frequency response and excellent power-handling ratings. To put it simply, it’s the best speaker when it comes to shaking the mirrors off your car. 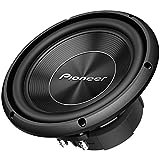 The Pioneer Champion series features three sizes, and each size provides excellent low-end. Since 12-inch subwoofers are typically the most popular size in a series, we reviewed this model.
The Pioneer Champion stands out as the only subwoofer we reviewed capable of reaching 20Hz, which is the lowest frequency that humans are capable of hearing. The highest frequency is 150Hz, allowing the sub to focus on producing the lowest of frequencies accurately. And it shows. Not only is this one of the highest-rated and popular subwoofers on the market, but it was also the clear favorite in our audio quality tests. It sounded deeper than other subwoofers but with good shape. The Pioneer Champion sub stands out with its power-handling specifications as well. It has the highest sensitivity rating of 96 dB, which is impressive considering the amount of air it has to move. Sensitivity ratings represent the volume, as measured at 1 meter using 1 watt of power. It’s the most important power-handling specification because it shows how efficient the speaker is at converting power into volume. By comparison, the lowest sensitivity rating we’ve seen for a subwoofer is 83 dB. With a continuous power-handling rating of 600-watts and a peak power handling of 2,000 watts, this subwoofer can handle more power than most subs we reviewed. When you combine this with the high sensitivity rating, you have a subwoofer that can shake the apples off your neighbor’s tree.

While the Alpine Type-S subwoofer didn’t receive the highest marks for audio quality in our evaluations, the bass is punchy and well-rounded. It’s very good for a sub that costs less than most.
When you consider that it has excellent power-handling specifications, the value is clear. The Type-S has average popularity among users. Most of the complaints we saw stem from the relatively low sensitivity rating, which means it requires more power to rattle your bones than most subwoofers, but most users have few complaints about the audio. In our evaluation of this subwoofer, which was performed at a local car audio shop, the bass was punchy but a bit too growly. This evaluation, combined with the user reviews, is why it received an A- for audio quality. Aside from the affordable price, the best feature of the Alpine Type-S subwoofer is its power-handling capability. The 12-inch subwoofer is rated to handle 500 watts of power continuously and has a peak power-handling rating of 1,500 watts. While neither specification is the highest we’ve seen, they are excellent. That said, you’ll also need it because of the low sensitivity. The Type-S has a sensitivity rating of 86.5 dB, which is on the lower end of the spectrum for subwoofers. When you consider that every 3 dB increase in volume requires twice as much power, it’s a huge difference between the most efficient sub and the Type-S, which would need over three times as much power to achieve the same volume. 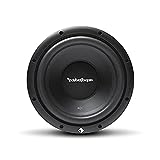 For punchy bass, the Rockford Fosgate Punch subwoofer is a great choice, for obvious reasons. With a name like “Punch,” there’s no hiding the purpose behind these subwoofers – the deep Kevlar-reinforced paper cone is designed to punch the air, creating thunderous bass notes to fill out your music.
This does wonders at making a kick drum sound snappy and big, but the downside is that it doesn’t provide a well-rounded and clear bass note. However, it’s one of the few series that has subwoofers for all types and sizes of enclosures – ranging from 8 inches to 15 inches. That is why it’s our choice for the most versatile subwoofer. The Punch series is among the most popular subwoofer series on the market. In my evaluation, I gave it a B+ for audio quality. While the punchy sound is great for some genres that focus on beats and snappy basslines, it can become too aggressive within some mixes. The 400-watt continuous power-handling rating is OK but not great, and the same goes for the 800-watt peak power-handling rating. It’s the 86 dB sensitivity ratings that is a concern, as it’s 10 dB below the most efficient subs. To put this into perspective, a 10 dB difference is considered the point at which sound is perceived to be twice as loud. This means that the most efficient subwoofers we reviewed can reach twice the perceived volume using the same amount of power. The Punch simply can’t reach the same bone-rattling volumes as the best subwoofers.

My passion for high-end audio started with my obsession for music. Ever since my first band entered a recording studio in the late 1990s, I’ve been a student of sound. Since that first album, I’ve recorded five albums with various bands in professional studios and recorded six solo albums with my own equipment. In addition, I spent a summer as the sound engineer for a local music venue in Provo in the early 2000s. So, with over two decades of experience, I have trained myself to listen to the subtle nuances in audio performances, and I can evaluate the quality of various frequency ranges.

My car audio experience began in 2002 when I purchased a 1987 Honda Civic CRX with over 250,000 miles for $1,200 because the previous owner had customized the sound system with high-end component speakers, a high-powered amplifier and two 15-inch subwoofers. He claimed to have spent over $3,000 on the sound system. In other words, I didn’t purchase my first car, I purchased my first sound system. The engine and wheels were just a bonus. Ever since then, I’ve been customizing and optimizing the audio system of my vehicles.

Determining audio quality with subwoofers is difficult because bass preferences tend to vary wildly from person to person. Many people will go out of their way to distort the music’s low frequencies, even if the original mix didn’t feature it that way. To get around this, I analyzed hundreds of user reviews for each subwoofer, looking for what people liked and didn’t like about the audio.

Then I went to a local car audio shop in Ogden, Utah and coordinated a side-by-side evaluation with the technicians. I listened to each subwoofer as it played some of my favorite songs in conjunction with car speakers. That gave me a good idea of how well each subwoofer supported the overall mix.

Buying a subwoofer is more involved than buying car speakers. With car speakers, you typically just make sure they fit the installation ports in your car and that the car stereo matches the impedance rating. At most, you may have to splice the connecting wires to the existing wires. However, subwoofers are complicated additions to a sound system because most vehicles don’t come with subwoofers, much less space for your subs. So, here are the other factors you need to consider before buying a subwoofer:

Unlike car speakers, which are easily powered by your car stereo, subwoofers are power hogs. Since they move so much air, they need a lot more power than standard speakers. This means you can’t add a subwoofer to your existing car stereo and expect it to do much. If anything, it will cause the stereo’s amplifier to burn out. So, adding a subwoofer means buying an amplifier.

Some subwoofers come with their own power. Powered subs come with their own enclosure, which has an amplifier that powers just the subwoofer. These typically cost more than just buying a subwoofer, but the cost tends to equal out when you consider additional costs for an amplifier, enclosure and crossover units. That said, most people prefer using a separate amplifier because it can better power your car speakers and provide better customization overall.

Most subwoofers come with a crossover unit. If not, you’ll typically get a crossover with an amplifier. Either way, it’s important to use a crossover to split the low frequencies to your subwoofer so that it focuses on producing only the lows. By proxy, this means that the car speakers don’t have to produce bass, just the mids and highs. This results in a better, more accurate mix.

You’ll also have to deal with a lot of wiring. There are wires from the amplifier to the car stereo, wires to the crossover and wires to the subwoofer. Unless you have a great deal of experience and confidence wiring devices and hiding the wires, you should probably have the subwoofer and amplifier professionally installed.

Each subwoofer we reviewed comes without an enclosure. You can purchase an enclosure separately, but you can also build your own. If you purchase a prebuilt enclosure from the manufacturer, it will better fit the recommended specifications and resonant frequency. However, customizing your own enclosure can be a fun and easy way to customize the sound to your own tastes.

Now, there are two types of enclosures to consider – sealed and ported. A sealed enclosure is airtight, which stabilizes the movement of the woofer as it pushes against the atmosphere. As a result, the performance is more accurate to the intended mix. Overall, it also means that the bass has a tighter sound and feel. At best, a sealed enclosure produces the low frequencies in the way the artist intended you to hear them. At worst, it means that a song with weak bass will sound as such.

A ported enclosure is usually a bigger box and features a hole, sometimes two. The hole equalizes the air pressure on both sides of the woofer, which means that the woofer can move more violently, creating a bigger, more aggressive sound. You can feel the air move both in front of the woofer and at the ports. That is why it sounds bigger. At best, a ported enclosure makes the bass feel closer to a live concert, where you feel the kick drum hit your chest and feel the bass lines rattle your bones. At worst, a ported enclosure sounds growly and overly distorted, causing it to overpower the mix.

Added to wishlistRemoved from wishlist 1