Since 2013, we’ve spent over 350 hours researching and testing car vacuums. The best car vacuum we found was the Metropolitan VM6BS500. Keep in mind the Metropolitan is around $25 more expensive than the next closest in price and over $60 more than our best value, but in our tests, it significantly outperformed the rest. It has unbeatable suction and a great set of attachments that make it easy to reach awkward, tight spots. It’s compact, powerful and worth the extra money for the performance and convenience. 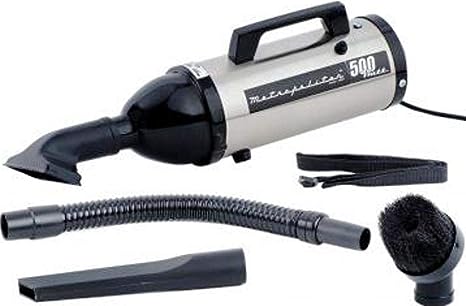 The Metropolitan VM6BS500 was the only car vacuum cleaner we tested that got a perfect score on our suction tests. We contrived tests that were meant to represent a variety of cleaning situations in your vehicle – actual pet hair, garlic skins to represent light debris, and sticky cereal that we ground into our test car’s carpets.
The car’s carpet and car seat looked like new after going over them only a handful of times with the Metropolitan VM6BS500. It was especially effective at cleaning stubborn dog hair, which was a problem for many of the vacuums we tested. This vacuum can save you time by easing the amount of work required to get your car clean. The power cord does make it inconvenient compared to battery-powered options. Also, this vacuum has a bag you have to change out when it gets full, which means you have to pay extra for bags. It’s also one of many vacuums in our lineup that won’t clean up wet messes. This is a lightweight vacuum but is missing a storage bag keeping the vacuum and its attachments organized in your trunk if you want to take it on the road. That being said, only two in our lineup provide a storage bag – both did not perform nearly as well in our tests. It is very versatile – effective at cleaning stairs, blinds and computer keys – and it will reach all the areas around the house you can’t reach with your household vacuum. The crevice tool and hose combination made it great for getting into tiny spots in between and underneath car seats. Its strengths far outweigh its weaknesses. 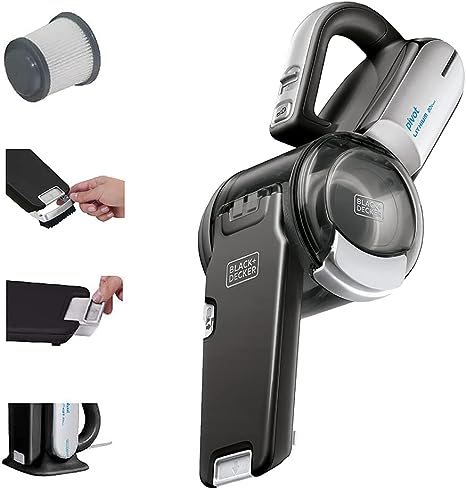 Car vacuum cleaners that plug into the wall are more powerful than ones that plug into a cigarette lighter. Our testing supported this notion, but the Black & Decker Car Pivot Handheld Vacuum, which plugs into your car, had respectable suction in our testing – on Cap’n Crunch, feathery garlic skins, dog hair and dirt.
The Car Pivot Handheld picked up the debris and left a clean pathway, albeit in several more passes than average, but it did a respectable job by the end. This tied for the highest score on maneuverability. Whether we were vacuuming under a seat or in the farthest corner of a trunk, nothing was out of reach. Even that extra-narrow space between the dash and the windshield was easy to reach with the Car Pivot Handheld – not the case with many of the competing products. This device has a simple bagless design. You don’t have to worry about replacing the bag when it gets full. It’s also extremely portable, and since it plugs into your lighter you don’t have to worry about keeping a battery charged. The nozzle and crevice tool are built in and collapsible, making it small and easy to stow away. While most of the tools are integrated onto the vacuum itself, you can attach a lightweight hose for jobs that require even more maneuverability. For especially tight spots you can attach a narrower crevice tool for extended reach. The Dirt Devil Extreme Power is the best option if you do not want to have to plug into a traditional outlet or your car’s cigarette lighter. This cordless car vacuum cleaner did well on all our suction tests, on dog hair, dirt and garlic skins.
It was better than average on almost all of our tests, in fact, clearing messes in a few passes. It could not top the units that plug into the wall for cleaning power but it was very good compared to the ones that plug into your car. It has a fold-down crevice tool that got us into a few tight spots but the competitors with hoses were even a little more maneuverable, especially when trying to vacuum under seats. There are some drawbacks to having a battery-powered vacuum; battery life can become an issue in between charges and in general over the lifetime of the vac. You’ll be out of luck if the vacuum battery dies out on the road. The Dirt Devil Extreme Power might work best if it stays in your home, especially since it is great for smaller cleaning tasks around the home, including but not limited to, cleaning your car. 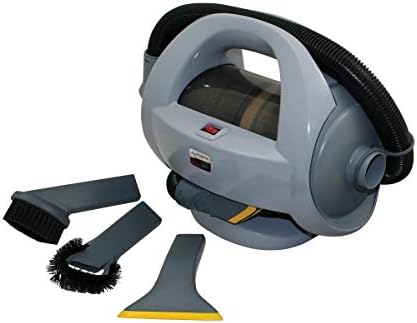 The Carrand auto vacuum cleaner is unique in a few ways, one being that it is one of the few car vacuums that has a hose. The hose makes it possible to get in between car seats and reach really far under stuff that has really low clearance.
Even though the body of the machine tied for the heaviest one we tested, this car vacuum is still easy to maneuver because of the hose. Even some of the smallest of the other car vacuum cleaners couldn’t reach as far under car seats as the Carrand because you can’t fit their whole body under and they don’t have hoses. Another way this vehicle vacuum differentiates itself is the onboard storage for tools. There were others we tested that give you a bag to store the attachments, and that was better than nothing, but having them with you where you are cleaning is even more convenient. The Carrand has a nice selection of tools too so you can attack all the different types of messes. The weight and bulk of this machine is a bit of a drawback, but most of the time you are using it you just have the hose in hand, not the heavy body. This did not score the very best on suction tests, either, but it was still better than most of the others.

The Hoover Air Cordless Hand Vacuum had some seriously strong suction in our tests. That is a little surprising for a cordless model – they tend to have less power than the units that plug into the wall.
In one test we put the tip of each vacuum cleaner on a flat-topped container to create a seal. Then we added weight until the seal was broken. The Hoover Air Cordless held the most weight of any car vacuum we tested – 7.5 ounces. It was not perfect on every test – it struggled quite a bit on the pet hair and the shape of its nozzle sometimes caused larger debris to get trapped. This Hoover has strong suction, though, which showed when it was cleaning most types of debris. This is a powerful and portable cordless option that was strong on most tests.

We research extensively to find some of the best car vacuums on the market and regularly update and test new models. We regularly contact manufactures with questions and consult professionals to get expert opinions and increase our knowledge and authority when it comes to car vacuums. Finding a good one can help you maintain your car and preserve your investment.

Ricardo Alatorre has owned his own auto detailing company in Utah for five years, and has many years of experience in the car business. He has seen some failed attempts at maintaining car interiors.

Proper maintenance is well worth the effort, though. Whether you sell to a dealer or sell privately, people pay more for a vehicle that has been cared for, said Alatorre.

“America is a car culture and people like their cars. They take pride in ownership of their cars, and in many cases, it is an extension of their personality,” Stern said.

How Much Does a Car Vacuum Cleaner Cost?

Car vacuum cleaners generally cost under $100 and average about $60, though there are a few from Dyson that cost right around $200. Our top scoring unit costs a little over $100 but the second best was only $35, so there are some reasonably good ones in the lower price range. We did not find a huge difference in performance when we compared the most expensive and least expensive.

We tested each vacuum in our lineup using an array of messes. We soiled car seats and mats with dirt, pet hair, garlic skins, crumbs and breakfast cereal, grinding each of them into test surfaces to see how the vacuums picked up different types of messes, whether course or fine. We recorded how well they extracted each substance from the various car surfaces. For some tests, we simply counted the number of passes it took each unit to get the carpet truly clean.

We also dropped dirt in a narrow crevice between a car’s front seat and the door frame to see how maneuverable each vacuum is in tight spots. We used the attachments included with each unit to access the narrow spot, giving it every chance to clean the mess.

We also looked at cord length, which matters if you need to clean in the back of a big SUV, as well as the weight of each vacuum. The lighter and smaller the unit, the easier it is to use for long periods of time.

How to Find the Best Car Vacuum Cleaner

The best auto vacuums are powerful and portable. Sometimes those two characteristics counteract each other, though. You should consider your own situation as you determine which is the best buy when it comes to portability versus power.

Generally speaking, vacuums that plug into the wall have the most powerful suction, but they tether you to places where electricity is available. This is inconvenient, but a vac that uses this kind of power likely has the suction necessary to handle stubborn messes.

These car vacs are ultra-portable, but you never know when the battery will lose power. Their suction is impressive, but it may fade over time as the battery ages, or they may have diminished suction in between charging sessions, even early on.

These are units that plug into your vehicle’s 12V outlet, originally used to power the car’s cigarette lighter. These generally have less suction than those that plug into regular outlets. Still, if you need something that can go anywhere, it may be worth it, and the best ones clean up most messes just fine. They just may not have the suction to clean up debris that is ground into the upholstery.

There are a handful of vacuums that can handle wet messes, and it’s nice to have that option, although an absorbent cloth and hot water can do almost as much for many spills. When it is fully dry, you can vacuum as normal.

Added to wishlistRemoved from wishlist 1