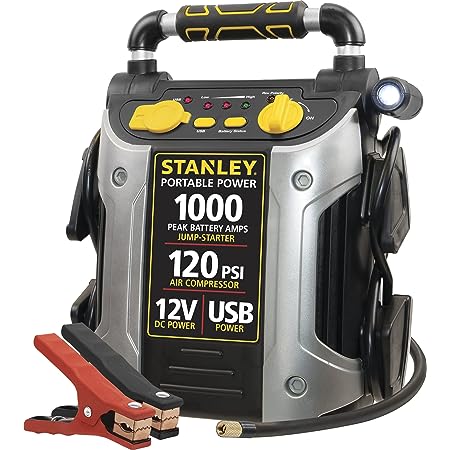 The Stanley J5C09 is the best jump-starter overall because it combines high output power that can jump-start small to large vehicles, and it has critical emergency features, like an air compressor for flat tires and a flashlight. In addition, it’s rated to work in cold weather, when batteries often struggle to perform.
Unlike most other jump-starters, which provide a jolt to get an engine to turn over, the J5C09 is both a jump-starter and a battery charger. With the trickle charger feature, you can maintain batteries in vehicles that you don’t use very often. The J5C09’s cables are 3.5 feet long, which means they can comfortably reach the battery connections. That said, the cables aren’t so long that they are a hassle to store, even in the built-in storage. So, while this isn’t as portable as one of the ultra-portable jump-starters that we reviewed, it won’t take up much space in your trunk. You recharge the battery of the J5C09 by plugging it into an outlet, so the overcharge protection is an important safety feature. Another important safety feature is the reverse polarity warning, which warns you if the connections are incorrect – the positive clamp on the negative connection, for example. 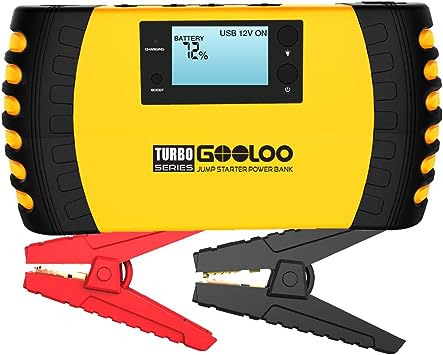 The GOOLOO GP200 is our pick for the best ultra-portable jump-starter because it packs a high-powered 1,000-amp output into a 6-inch box. In other words, it’s powerful enough to revive large trucks but small enough to fit into many glove boxes or under your passenger seat.
It’s even small enough to fit in a pack for hiking or camping to charge electronic devices. Using a rechargeable lithium-ion battery, the GP200 works even in cold temperatures that make car batteries more susceptible to discharging. The GP200 also doubles as a mobile charging device with two USB ports. That means you can charge your smartphones and tablets while you drive or while you’re camping. The battery of the GP200 has the capacity to jump-start your vehicle approximately 30 times with each full charge. The charging indicator on the jump starter’s LCD screen lets you know when its power is running low. One downside is the 6-inch cables, though that length is common among ultra-portable jump-starters. The short cables mean that it can be difficult to reach the connections on the car battery, particularly with larger car batteries. That said, it is a minor inconvenience that is outweighed by the portability. Also, it does feature an LED flashlight, which helps in low-light or dark conditions 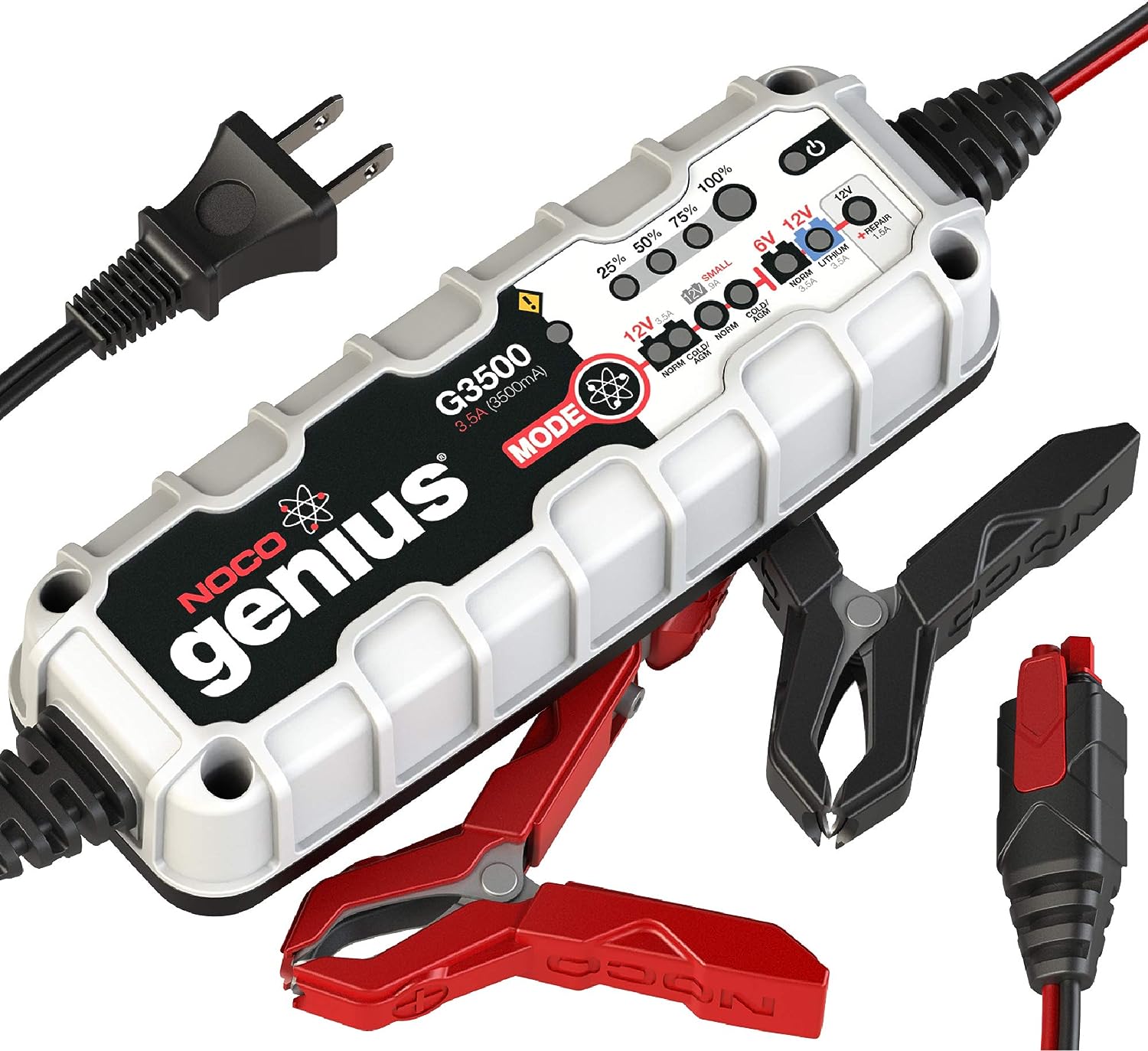 The NOCO Genius G3500 is our pick for the best battery charger because of its versatility. It’s the only battery charger we reviewed that can charge and maintain 12- and 6-volt lead-acid batteries, as well as 12-volt lithium-ion batteries. And it does this in a more compact design than other battery chargers we researched.
A feature that we love is the 12-volt Repair Mode, which does more than just charge dead 12-volt batteries. It uses a progressive recovery method to restore lost charge capacities in heavily sulfated batteries. To put this in simpler terms, it can recover the battery’s ability to maintain a charge when the voltage has dropped to as low as 2 volts. Most chargers can’t save batteries that have dropped below 3 volts. The safety features of the G3500 are excellent as well, which is more important than with jump-starters because chargers are left unattended for hours at time. To avoid overcharging, this charger monitors the battery and charges only when the battery can be charged. This ensures that the battery doesn’t overheat. In addition, the reverse polarity protection feature ensures that you don’t damage the battery if you accidentally connect the clamps to the wrong connections – negative to positive or vice versa.

If your truck sits in the garage all winter, the Black & Decker BC15BD breathes life back into its dead battery in less than 10 minutes. It takes 10 hours to reach an 80 percent charge. In addition, you can use the 40-amp engine-start feature to start a dead car within 90 seconds. The Black and Decker BC15BD isn’t the most affordable or most powerful battery charger, but it is certainly the fastest. The BC15BD uses a three-stage charging process. It automatically detects battery’s remaining charge capacity and adjusts the charge rate appropriately. As the battery charges, gauge the progress on the small LCD display. While not every battery charger on the market has a display, the orange and black design is a curious choice. It’s clearly designed to match its exterior, but the text and gauges are not easy to read, especially in low-light conditions.

There are many solar battery chargers on the market, but most are designed to charge your smartphone. The Sunway Solar is one of the few solar chargers designed to charge car and motorcycle batteries. Since it doesn’t have a built-in amp and doesn’t require a power-source, this battery charger is one of the cheapest ways to charge your dead battery, just don’t expect it to do it quickly. This battery charger is ideal for situations where you have days or weeks to resurrect your vehicle’s battery. It’s not for emergency scenarios. Due to its slow way of charging a battery by using power from the sun, don’t use the Sunway Solar to resurrect a fully discharged battery. Rather, it’s more of a battery maintenance tool, an affordable device to keep your batteries powered. For example, when you park your motorhome for the winter, you simply connect it to your battery, place the solar panels on the dash, where the sun hits, and it keeps the battery charged throughout the winter.

Australialists has provided buying guides for battery chargers and jump-starters since 2011. And we’ve been reviewing car technology for even longer than that, covering a wide swath of categories that includes car speakers, stereos, in-dash navigation, backup cameras, dash cameras, radar detectors and more. We regularly spend up to 120 hours researching, evaluating and testing the products we review, always with the purpose of helping you find the best product to make your commute better, safer and more enjoyable.

How Much Do Battery Charters and Jump Starters Cost?

Car battery chargers and jump-starters are used for different purposes. As such, they have different costs. Jump-starters are typically more expensive, ranging between $50 and $110. This is because they come with a portable battery designed to jump a dead battery. Chargers, however, don’t have batteries. Rather, they require a power source to amplify the power and recharge a dead or dying battery. These typically cost between $30 and $60 and are used to maintain battery performance on rarely driven vehicles rather than as an emergency preparedness tool.

For these reviews, we didn’t test any of the products. Rather, we relied on extensive product research. To begin, we created a list of the 10 best car chargers and the 10 best jump-starters, based on user reviews and popularity. Then we narrowed this list down to the top five products for each by comparing and evaluating the power specifications, size, safety and convenience features.

Car chargers and jump-starters are very similar in many respects. Many of the features that we evaluated are shared – amps, reverse polarity protection, portability and easy-to-read screens. Chargers often have additional gauges, such as for the alternator and convenience features like USB ports for charging electronic devices.

However, car chargers and jump-starters are different, which means they were evaluated differently. Chargers require a power outlet and have a relatively low amp output that will charge a discharged battery enough so that it will start a vehicle. Jump-starters are batteries that provide a much higher amp output to get your car started immediately. They are typically used as part of an emergency preparedness plan. If your battery dies while you’re out camping, for example, a car charger is useless, but a jump-starter can save you from being stranded.

It’s easy to confuse car battery chargers and jump-starters, especially if you’re not an automobile enthusiast. Both provide power to your car’s battery, but in very different ways and for very different purposes. Car chargers plug into a wall outlet and deliver a small charge that maintains a battery’s charge when it isn’t being used. In other words, car chargers are for long-term maintenance. You use a car charger for RVs, boats, four-wheelers, motorcycles and other vehicles that often spend weeks or months without use. If you don’t frequently use a vehicle, the battery’s charge will deteriorate. But when you frequently use a vehicle, the alternator keeps the battery charged, unless the battery is dead. That’s where jump-starters come into play.

A jump-starter is a battery that delivers a high jolt of electricity to your vehicle so that it can get started. In essence, it temporarily takes over for your dead battery and helps your car get started. Then, after the car is started, the alternator should be able to recharge the dead battery, unless the battery is old and has lost its ability to hold a charge, which happens to all batteries eventually.

There are two types of jump-starters: portable and ultra-portable. Portable jump-starters use a lead-acid battery like the one in your car and can start vehicles of any size in extreme conditions. They weigh around 18 pounds and are roughly the size of a plastic shopping bag, so you need some free trunk space to tote one around.

The best ultra-portable jump-starters weigh around 2 pounds and can fit in your glove compartment or under your passenger seat. These are ideal for small- or medium-size vehicles, but usually won’t work on large trucks. In addition, they have USB ports you can use to charge your smartphone and an LED flashlight. Ultra-portable models use a lithium-ion power source, and you need to recharge them periodically based on how much you use them. You can expect to revive a battery more than 10 times in a period of several months before you need to plug yours into a wall socket to recharge.